Abst：Some industry experts have pointed out that laser headlights are the mainstream solution for future automotive lighting. Nowadays, after the halogen headlights, Xenon HIDs and LEDs, the headlights of

Some industry experts have pointed out that laser headlights are the mainstream solution for future automotive lighting. Nowadays, after the halogen headlights, Xenon HIDs and LEDs, the headlights of the car have ushered in the laser headlights that have been applied to some high-end models. The constant innovation of automotive headlight technology also has its important significance. Nowadays, the evaluation of the lamp is not limited to a single indicator of the brightness of the lamp. The energy consumption, design and driving assistance functions of the lamp must be taken into consideration. Guotai Junan recently conducted a series of analysis on laser lights with the theme of laser lighting. Zhikujun took everyone to learn more about it. 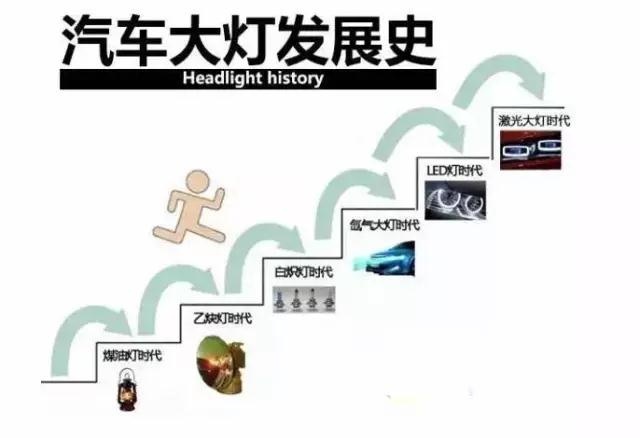 In comparison, the laser headlight itself has many advantages such as high energy efficiency, small size, and good directionality. Relevant survey analysis shows that although the market generally believes that the laser headlights are still in the concept product stage, as of now, the laser headlights have been successfully deployed in a variety of high-end models, and their popularity and market size have exceeded expectations.

In 2015, the production models equipped with laser headlights on the market were still quite limited, only the BMW i8, and the rest included a small number of concept models (such as the Audi R8, the total will not exceed 100). By 2016, some of the models in the BMW 7 Series were finally equipped with laser headlights. Due to the small inventory base, the output value of laser lamps was growing at a higher rate. 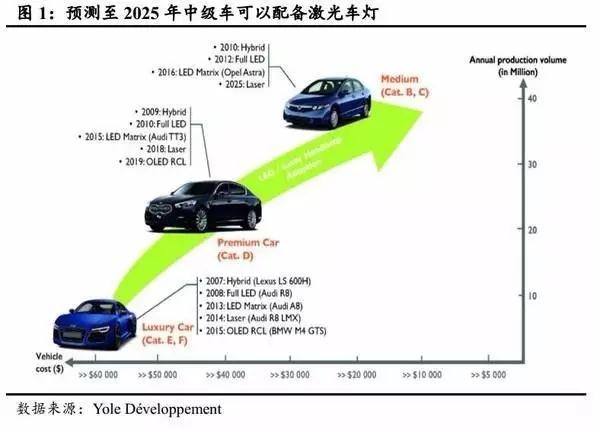 According to Research and Markets, the annual growth rate of laser headlights is as high as 267%. In the following, based on the sales of the BMW i8 and some 7 series, the market space is simply measured. According to the BMW annual report, the BMW i8 has a global sales volume of approximately 6,000 units in 2016 and the BMW 7 Series has a total sales volume of 60,000 units. The model of the headlights is conservatively estimated to account for 10%, which estimates that there are nearly 7,000 sets of annual production. Because the price of laser headlights is relatively expensive, it is about 10,000 US dollars, and it can be inferred that the market size in 2016 is nearly 70 million US dollars. With a growth rate of 267%, the 2020 laser headlight market will reach $3.5 billion. 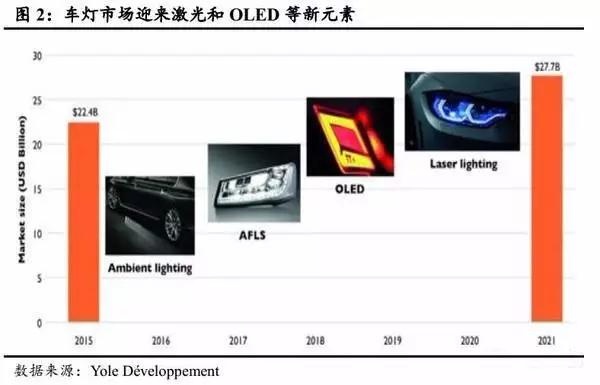 In addition, the Yole market research report said that the global automotive lighting market will be approximately $27 billion in 2020. It is estimated that the output value of laser lamps will account for about 8% of the automotive lighting market. Considering that the price of laser lamps is much higher than other types, the penetration rate is about 5%, which shows that the industry has a broad prospect.

Some industry experts have pointed out that laser headlights are the mainstream solution for future automotive lighting. Looking back, after the halogen headlights, Xenon HIDs and LEDs, the headlights of the car ushered in the laser headlights that have been applied to some high-end models. Laser lamps have great advantages in terms of brightness, energy consumption and shape design. Although the manufacturing cost is high at this stage, the mass production process is close to maturity. After the expected cost reduction, the penetration rate will rapidly expand and become the automotive lighting market. The important composition.

At the same time, we can see that the speed of the replacement of headlight technology is accelerating. In fact, since 2004, LED headlights have been active in the design of headlights, and intelligent LED headlight systems such as adaptive high beam have come out. In 2014, the BMW i8 became the first production car equipped with a laser high beam. The iterative replacement of car headlights is accelerating, and the popularity of laser lights will be faster than people expected. According to the analysis of the penetration path of Xenon LED composite lamps, LED headlights and LED matrix lamps from top to mid-range vehicles, laser lights will appear in most high-end models in 2018 and become the standard for mid-size cars in 2025. Configuration, the potential market size is up to tens of millions.

There is no doubt that the constant innovation of automotive headlight technology has its important significance. Nowadays, the evaluation of the lamp is not limited to a single indicator of the brightness of the lamp. The energy consumption, design and driving assistance functions of the lamp must be taken into consideration. This is because the new energy vehicle is an inevitable trend, and the reduction of the energy consumption of the lamp is beneficial to the effective use of the battery. Secondly, new light sources such as LEDs and lasers give the lamp design greater freedom. Moreover, the new type of lights can meet the intelligent control needs of assisted driving.

According to reports, relative to LED lights, the laser headlights use a blue laser as a radiation source, and then a white light beam is synthesized by a yellow phosphor lens. Among them, the short-wave blue laser diode has a brightness of more than a thousand times that of the LED, and only requires 60% of the latter. In addition to the absolute advantage of brightness, the contrast and focus of the beam is also higher than traditional lamps. Among them, BMW's laser lights have a color temperature of 5,500 to 6,000 K, which is the highest color temperature allowed by the international car light standard.

The analysis pointed out that in the future, laser lights will help drive safety and intelligence. Since the high-intensity white light of the laser lamp is generated by the blue laser excitation yellow phosphor filter, it can avoid the laser damage that the public is worried about. The laser high beam has a working distance of up to 600 meters, and the far-reaching illumination distance ensures safe driving at night. In addition, laser lights are also the best carrier for smart lights, such as smart matrix lights and dynamic light technology can be better achieved by laser.

The safety of laser lights is guaranteed, and the long-distance illumination distance guarantees the safety of driving at night. In laser headlights, lasers refer to the excitation source rather than the final illumination. From the formation mechanism of white light, the working principle of laser headlights and white LEDs is similar. The final white light belongs to fluorescence instead of laser, so there is no laser damage to be worried. At present, the laser light is only used in the high beam mode, the working distance is up to 600 meters, and the brightness reaches 580 cd/mm2, far exceeding the traditional LED high beam, which greatly improves the driver's night vision range. As for the problem that the high beam affects the opposite vehicle, the intelligent sensing system can detect the road condition to switch ahead, or use the matrix technology for local illumination.

Laser lights and smart lights complement each other. Future lights will use hundreds of lighting programs depending on the road conditions. Although most of them have been completed with LEDs, the directionality and brightness of laser lights are more advantageous, enabling smarter designs. For example, Audi combines intelligent matrix technology with laser lights, and through a miniature mirror array, it can automatically turn off some of the headlight units according to the opposite direction of the vehicle and change the illumination area. In addition, as a laser source, laser headlights can also be used as auxiliary light sources for intelligent driving systems such as collision warning, emergency braking, automatic cruise control and ADAS. For example, Laser headlight interference sensing technology is expected to be used as a vehicle width guidance indicator to avoid nighttime driving accidents and maintain a safe distance from the vehicle in front.

Research shows that laser illumination replaces white LEDs with lasers in various scenarios to achieve functions such as public illumination, display illumination, and projection imaging. Laser projection miniaturization can also generate consumer electronics applications such as cell phone projection. In addition, if a laser is used instead of an LED, the data transfer rate of LiFi will be greatly increased.

Laser lighting is an upgraded version of LED lighting, and laser light reflects the booming of laser lighting. In a nutshell, laser illumination replaces white LEDs with lasers to achieve functions such as public lighting, display illumination, and projection imaging, such as laser projection and laser television. Laser miniaturization can also lead to consumer electronics applications such as cell phone projection. The essence of Laser TV is laser projection display. The laser TV consists of a projection screen and a laser projector that projects a 100-inch effect with a distance of 60 cm from the screen. Compared with ordinary projectors, laser TVs use red, green and blue three-color lasers or white lasers instead of xenon lamps, and the color saturation is greatly improved. Unlike technologies such as OLEDs, the nature of laser projection makes the cost of display size expansion extremely low, so laser TVs are suitable for large screens or outdoor scenes.

LiFi uses lasers to dramatically increase data transfer speeds. In order to further improve the efficiency, the original LiFi LED light source can be replaced by a semiconductor laser. Recent studies have shown that LiFi transmission rates based on modulated lasers are approximately ten times that of LEDs. White LEDs are obtained by exciting yellow phosphors with blue LEDs. The luminescence process limits the modulation rate. White lasers can be obtained by mixing different wavelengths. The modulation rate is increased and the signal frequency band is multiplied. LiFi rates using LEDs are approximately 10 Gb/s, while LiFi using lasers can easily reach 100 Gb/s.

Previous： Car lights are not just lighting Next： No Information