How to choose LED headlights and xenon headlights?

Abst：With the rapid development of economic technology, more and more people buy cars. However, in the process of buying a car, many people only care about the brand and performance of the car, but ignore

With the rapid development of economic technology, more and more people buy cars. However, in the process of buying a car, many people only care about the brand and performance of the car, but ignore many details. For example, which kind of car light should I choose? Is the LED headlight? Still a xenon headlight? Let's first take a look at LED headlights and xenon headlights.

LED is the abbreviation of English light emitting diode. Its basic structure is an electroluminescent semiconductor material chip. It is cured with silver or white glue to the bracket, and then connected to the chip and circuit board with silver wire or gold wire. Then, it is sealed with epoxy resin to protect the inner core wire. Finally, the outer casing is installed, so the seismic performance of the LED lamp is good.

It is understood that LEDs, light-emitting diodes, are solid-state semiconductor devices capable of converting electrical energy into visible light, which can directly convert electricity into light. The heart of the LED is a semiconductor wafer with one end attached to a holder, one end being the negative pole and the other end connected to the positive pole of the power supply, so that the entire wafer is encapsulated by epoxy. The semiconductor wafer consists of two parts, one part is a P-type semiconductor, in which the hole dominates, and the other end is an N-type semiconductor, which is mainly electrons here. But when the two semiconductors are connected, they form a P-N junction. When a current is applied to the wafer through the wire, the electrons are pushed toward the P region. In the P region, the electrons recombine with the holes, and then the energy is emitted in the form of photons. This is the principle of LED light emission. The wavelength of light, which is the color of light, is determined by the material that forms the P-N junction.

A xenon lamp (HID) is a high pressure gas discharge lamp. The xenon lamp is a heavy metal lamp. It is filled with a variety of chemical gases, such as helium gas, in an anti-ultraviolet crystal quartz glass tube, and then the vehicle 12 volt power supply is instantaneously increased to 23,000 volts through a supercharger. At high voltage, helium gas It will be ionized and produce a light source between the two poles of the power supply. The performance of the xenon lamp is significantly improved compared to the halogen lamp. Its luminous flux is more than twice that of the halogen lamp, and the efficiency of converting electric energy into light energy is also more than 70% higher than that of the halogen lamp.

The full name of Xenon headlights is: HID (High Intensity Discharge Lamp) gas discharge lamp, which uses the matching electronic ballast to instantly raise the 12V voltage of the car battery to a trigger voltage of 23KV or more, and ionizes the helium gas in the xenon headlights to form an arc. Discharge and stabilize the light to provide a stable car headlight illumination system. Xenon lamp broke the principle of tungsten light invented by Edison. The quartz tube was filled with high-pressure inert gas - Xenon helium, replacing the traditional filament, with mercury and carbon compounds on the two electrodes, and 23,000 volts through the ballast. The current stimulates the xenon to illuminate, creating a perfect white arc between the two poles, which emits light close to perfect sunlight. 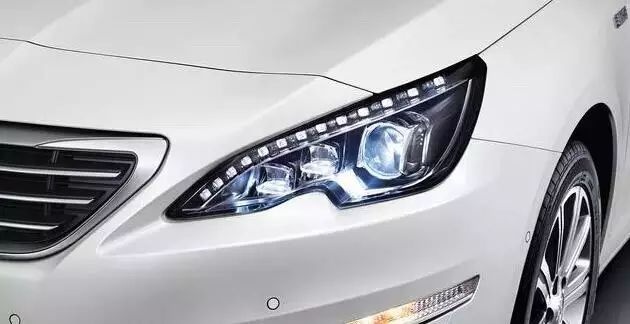 In this way, the two lamps are very powerful high-tech products. Then, what kind of lamps do the taillights and headlights choose to achieve good lighting effects and the overall aesthetic effect?

In terms of shape, the most prominent feature of LED lamps as car lights is that they are composed of a large number of small, high-density lamp particles, which are usually combined into a certain shape, such as a light wire or a large whole. Area. Xenon headlights, as car lights, are generally relatively independent individuals. Of course, there are also some models that use bi-xenon headlights.

Of course, the most important thing about the lamp is to illuminate. If the two lamps are more than one brightness, it is definitely the LED lamp that has an advantage in luminous efficiency. However, the brightness of the LED light is sufficient, and the illumination distance is relatively limited compared to the xenon headlights, generally less than 10 meters. Xenon headlights are also bright, but slightly inferior to LED headlights. However, its main role is originally used for lighting. Although the specific illumination distance is not statistical, it is much more than the traditional LED headlights.

Secondly, in terms of energy saving, under the use of the same power LED lamp and Xenon headlights, the LED luminous efficiency is higher, although its ability to withstand high temperatures is slightly weaker, the concentrating effect is slightly worse than the xenon headlights. The advantages of LED itself being more energy efficient are unquestionable. Energy saving and environmental protection are the characteristics of LED lights.

Speaking of this, I believe that everyone has a bottom in mind, like the small size, play a series of reactions and want to save energy and environmental protection can choose LED, like a whole, bright distance may wish to consider the Xenon headlights. However, in fact, how to choose, in fact, still depends on the specific configuration of the model and personal needs.